The Expeditionary Fire Support System (EFSS) was developed in response to the United States Marine Corps need for a fire support system that is lighter, more mobile and internally transportable for missions requiring tactical versatility, speed and close-in fire support.

The EFSS expands the maneuver commander’s choices of fire-support capability against an array of targets including light-armored, motorized, and dismounted personnel; command and control systems; and indirect fire systems. The 120mm towed rifled mortar and accompanying ammunition trailer are designed to be internally transportable in the MV-22 Osprey, CH-53, C-130 and the C-5 aircraft.

The Expeditionary Fire Support System utilizes a 120mm towed rifled mortar that can fire smoothbore or rifled ammunition. The rifled mortar rotates the round as it exits the barrel providing greater stability, accuracy and range over current smoothbore ammunition. 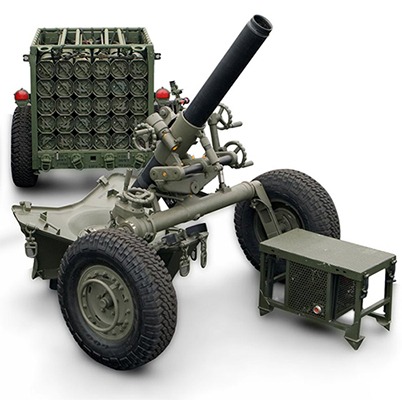