Purpose: This cartridge is used in a direct fire, anti-armor role and is specifically designed for long-range tank engagement.

Description: The C76A1 (FP105) cartridge is made up of two major elements, the projectile assembly and the cartridge. The projectile assembly consists of both a ballistic subprojectile and parasitic hardware. The subprojectile is composed of a ballistic monobloc tungsten alloy penetrator, an aerodynamic windshield and a fin. The subprojectile is propelled downrange at hyper-velocity by the parasitic sabot assembly, which transfers momentum from the propellant gases to the subprojectile in-bore through a series of mating buttress grooves. The sabot assembly consists of a three-segment aluminum sabot, a bore riding steel bourrelet, a two-piece plastic slip band/obturator, and a molded elastomeric seal to prevent gas leakage. The sabot incorporates aerodynamic scoops at both the forward and aft ends to produce a smooth, symmetric discard from the subprojecticle to muzzle exit. This is accomplished by employing the centrifugal forces of the barrel and the pressures of muzzle blast to insure an unimpeded, and accurate launch. The bourrelet and obturator maintain sabot integrity and provide obturation during in-bore travel. Upon launch, these components break away in a controlled and reproducible manner when a specific load is exerted by the action of the propellant and aerodynamic forces. 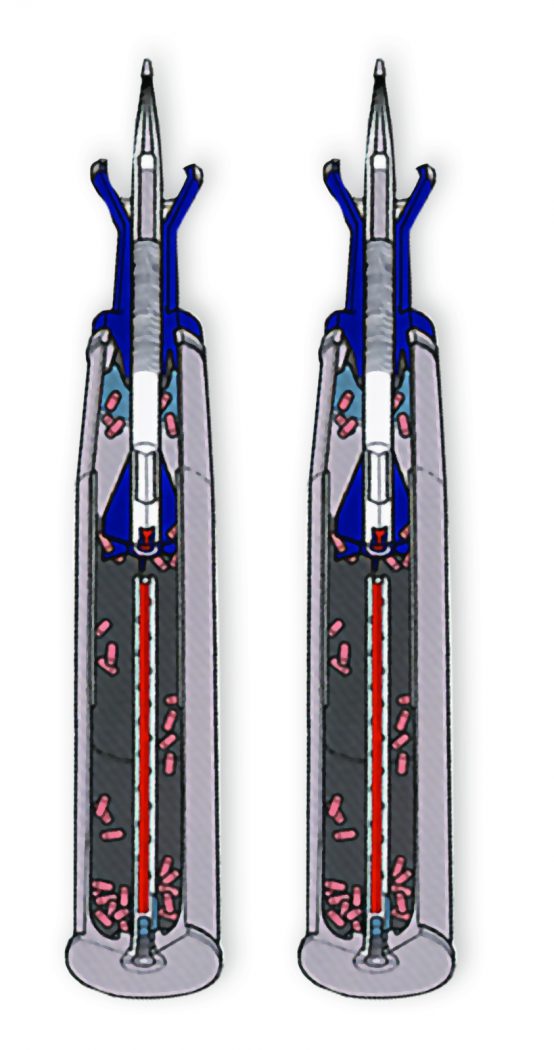